Supercharger: TRD Supercharger (Installed February 2013 by Cochrane Toyota) – When  I chose the Tacoma over the Frontier, one reason was the acceleration. On paper, they both had the same displacement but the Frontier’s torque was rated slightly higher. It did not feel this way. One of my many bones to pick with the Frontier but back to the Tacoma. I noticed that going uphills with a load was sometimes a problem. I also like going faster. The TRD Supercharger was a no brainer especially when it came down to preserving the powertrain warranty. URD (Underdog Racing Development) offered a 4 stage supercharger that would ultimately cost about the same but would offer more torque at higher rpms whereas the TRD SC gave more torque at the lower and mid range rpms – what I was looking for. The downside to URD’s setup is that it would void my warranty. 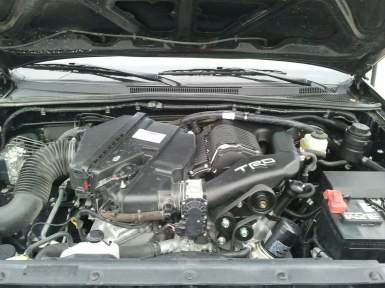 Out of the box, the 2011 Tacoma’s 4.0 V6 pushed 236hp and 266lb-ft of torque. With the supercharger, it would rumble out a (at the time) decent 304hp and 334lb-ft of torque. So…I went with TRD and oh boy…does it deliver. Also heads up – they change your engine air filter to the TRD reusable engine air filter – basically a rebranded K & N filter. Note: Do NOT get/use the TRD cleaning kit – the oil spoils and becomes thick as molasses very quickly. Just get K & N’s cleaning kit. It comes with a cleaner that you spray on and the oil comes in an aerosol can – I’ve never had the oil gum up on me. The oil from the kit helps catch more dirt. The cleaner included is good but really you can use any cleaner – Simple Green, Spray Nine, etc. I ended up buying another reusable performance air filter so I can just swap the filters during cleanings. Be careful not to over oil the filter as this could affect air flow and trip your mass airflow sensor and throw your check engine light on.

I believe they also add in an intercooler of sorts in front of your factory radiator. This comes with a few implications for upgrades under the hood down the road. 1. it eats up a little space behind the front grill – somewhere lots of people are putting aftermarket lights. 2. it adds a reservoir just to the right of the supercharger and behind the fuse box which eats up another spot where people place compressors, fuse panels, relays, etc. Also the massive hoses from the intercooler to the reservoir to the supercharger get in the way of adding accessories…but more on this in the dual battery install (link to follow once I finish that post).

Cons: The whine of the rotors takes a little getting used to. You need to use premium fuel exclusively or risk engine knocking due to the different compression (they program your ECU to adjust accordingly – also eliminates the need to chip the vehicle).

Quickshifter: TRD Quickshifter (Installed February 2013 by Cochrane Toyota) – There are a couple options for quickshifters out there. Underdog Racing Development has one with lots of good reviews and solid performance, however, there were also some negatives as it was just an add-on to the existing shifter so some people complained of some poor fitment and rattling. TRD’s was a little more expensive but replaced the entire shifter assembly. No rattling to date and shortens the throw significantly. Doesn’t feel like I’m driving a cheese wagon anymore! At first, throwing the gear into reverse takes a bit of muscle but after a few years, it goes in much smoother (insert dirty joke here…you know the one I’m talking about…).

Cons: None. This is a must if you’ve got an MT Taco.

View all posts by thenooblanders

One thought on ““PPPOOWWWEERRR!!!” – Jeremy Clarkson”